It’s become a familiar and depressing sight: the shuttered doors, the “Going Out of 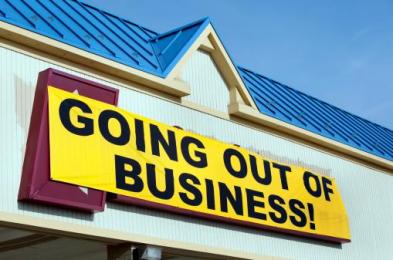 Business” signs and the empty storefronts. And it’s not just happening to the mom-and-pop shops of our neighborhoods. In fact, dozens of major, national brands we’ve grown up with are disappearing from the country’s retail landscape.

What’s happening to the retail world in America? Is there any way to stop the mass wave of corporate bankruptcy, or will we soon be stuck buying every item we want or need, from groceries to mattresses, on the internet? And most importantly, what does it all mean for the future of the economy?

The steady vanishing of major retailers across the country has been dubbed the “retail apocalypse” by mainstream media, with the finger of blame pointed squarely at the explosion of online shopping. But a deeper look reveals another story.

Yes, dozens of retailers have filed for bankruptcy since 2010 and more than 12,000 physical stores have closed their doors. But there’s a crucial detail the media has missed. A recent report by the IHL Group finds that, for every retailer that is closing some or all of its stores, 5.20 are opening new locations. In other words, there are more companies opening stores than closing them in every sector of retail, from department stores to mom-and-pop shops. Data from the Census Bureau further supports these findings: In 2018, the overall number of retail stores in the U.S. increased by 3,100.

The report stresses that the retailers declaring bankruptcy only account for a surprisingly small number of brands. To illustrate, at the halfway point of 2019, 16 retailers had filed for bankruptcy, but those 16 were responsible for 73% of the year’s retail store closings across the country.

Among the new stores establishing themselves in place of those who have gone out of business, the trend seems to be moving toward smaller stores that already have a strong online presence. This reflects the evolving needs of today’s consumers: Customers are more likely to visit a brick-and-mortar store for getting a feel for the company’s product, or to try out an expensive item, and then go home and make their actual purchase online.

While the media might have you believing that shopping malls are an endangered species, in truth there are thousands more brick-and-mortar stores in the country today than there were a decade ago.

What kinds of stores are still thriving?

Despite the wave of bankruptcy among chain retailers, there are some segments of retail that are thriving.

One such sector is the bargain department store, including Marshalls, T.J. Maxx and Home Goods, where shoppers enjoy the thrill of finding a steal of a deal they can walk home with that same day. Budget-priced fast-fashion brands, like Old Navy, H&M and Zara’s, are doing surprisingly well, too. Another thriving sector is the warehouse club, like Costco and BJ’s, for similar reasons.

The world of retail may be undergoing a massive shift toward digitization, but finding a bargain never goes out of style.

What do all these closings mean for the economy?

While it may be true that there are more stores opening than closing, this reality does not necessarily reflect well on the country’s level of employment. Retail is one of the largest sources of U.S. employment, accounting for close to 16 million jobs nationwide. As mentioned, most of the stores replacing those going bankrupt are smaller stores, many of which hire fewer than five employees. Consequently, when a major retailer, like Forever 21, announces that it plans to close 178 of its stores by the end of the year, this means thousands of workers will soon be jobless. In fact, the retail sector has lost a whopping 200,000 jobs since January 2017.

The good news, though, is that most of those laid-off workers seem to be finding new jobs before their joblessness can adversely affect the economy. The national unemployment level continues to linger at a half-century low, and consumer spending remains strong. Unfortunately, though, many economists anticipate a recession within the coming year. If their predictions are accurate, consumer spending will likely plunge and accelerate retail bankruptcies and layoffs. In a recession, credit availability tightens and interest rates increase, which can negatively impact the retail sector as well.

“Brick-and-mortar retailers are already in recession,” says Mark Zandi, chief economist for Moody’s Analytics. “They’ve been laying off workers coming up on three years. And this is a time when consumers are out spending aggressively. If the broader economy is in recession, there is going to be blood in the streets.”

While there’s not much you can do to change the tide of the national economy, you can help support your own community by shopping at local retailers and choosing to frequent brick-and-mortar shops, instead of making the internet your first stop for all your shopping needs.

Let’s do what we can to keep our local economy strong.

Your Turn: Do you think the economists are right, and we’re headed toward a recession? Share your thoughts with us in the comments.

One thought on “What Does The Retail Apocalypse Mean For America?”